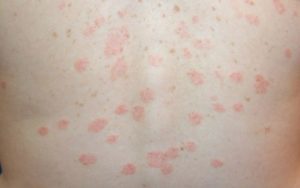 It occurs mainly in autumn and winter, is not contagious and is due to the HSV7 virus.

People who have been sick once with rosacea do not get the disease again. This is because they have developed antibodies and acquired permanent immunity.

People with pitiriasis rosea develop a round or oval, light red rash with a slightly raised circumference, which is covered with scales and rarely with blisters. Its center is wrinkled and light in color, almost to the normal skin color of the person.

Within 10-15 days from the appearance of the first plaque, the rest of the rash appears, which is usually symmetrical.

In cases where itching does not coexist with the rash and it resolves on its own, no treatment is needed.

If the person develops itching in the area, they should avoid hot baths and the use of non-specific soaps, as well as rubbing with a sponge or hard cloth. Corticosteroids are sometimes needed and are an effective treatment, able to stop the natural course of the disease.