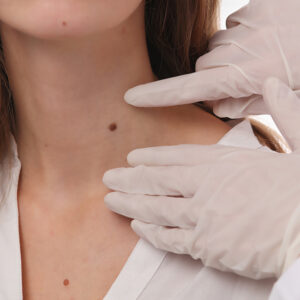 Moles, commonly known as olives or moles, are the clinical manifestation of benign proliferation of cells found naturally on our skin. Ways to Remove Moles

A nevus may be removed because it is suspected to be a mutation, because it is in a place that is frequently injured and causes problems in everyday life, or because it causes a cosmetic problem for the patient. The appropriate way to remove a mole should be decided after discussion with the Dermatologist.

In general, the ways to remove moles are as follows:

Simple and quick way to remove a mole, where after local anesthesia with xylocaine solution, the protruding part of the mole is cut with a blade.

Surgical Removal of a Mole

When the moles are flat or when malignancy is suspected, preventive surgical excision of the moles as well as the surrounding borders by a dermatologist is recommended, so that the piece can be sent for biopsy.