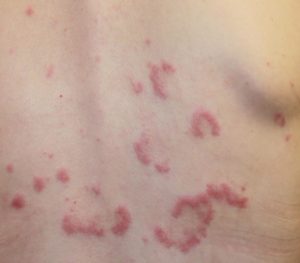 Jessner lymphocytic infiltrate is an uncommon skin condition that presents as non-scaly red patches and lumps on the face, neck and upper back. They are usually painless and do not itch. Lesions may go through periods of remission and exacerbation over months or years. Total spontaneous resolution has also occurred in some cases.

The cause of Jessner lymphocytic infiltrate is unknown. It is classified as a benign T-cell lymphoproliferative disorder. Some cases have been associated with Borrelia infection, the cause of Lyme disease.

Michael Papamichael2021-07-23T14:20:52+02:00
We use cookies to ensure that we give you the best experience on our website. If you continue to use this site we will assume that you are happy with it.OkNoRead more
Go to Top